Few Roofing Products offer the durability, strength, and performance of metal roofing. That being said metal roofs aren't indestructible and they can leak. Here are 5 common reasons even properly installed metal roofs can leak.

Over driven screws: In an attempt to ensure a tight seal between the metal roofing and the screw head many roofing companies will over drive the screw. The unneeded torque breaks the rubber washer and tends to spin it out to the side.

Under driven screws: These are a result of not enough torque on the screw to properly seat the rubber washer to the metal roofing panel. The rubber washer is never compressed and no gasket is formed.

Screws driven at the wrong angle: These don't allow the rubber washer to sit flat on the metal roofing. Part of the screw is sealed but part is not sealed.

Screws that have missed the metal strut or wood framing below: These have nothing to seal against. These can be hard leaks to find as many times the screw is their but without touching it you wouldn't know that it didn't hit anything and didn't seal.

Even if the screws were installed correctly with the right amount of torque it doesn't mean that the rubber washer is safe. Hot  summers followed by hard cold winters are unkind to the rubber washers. They degrade and lose their seal and it can be very difficult to distinguish which screw is leaking and which is not. 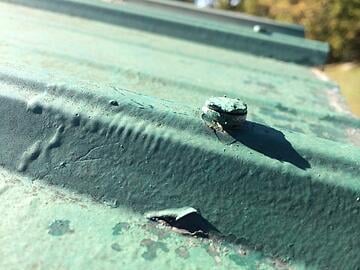 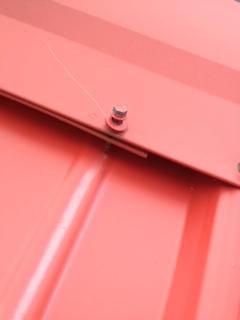 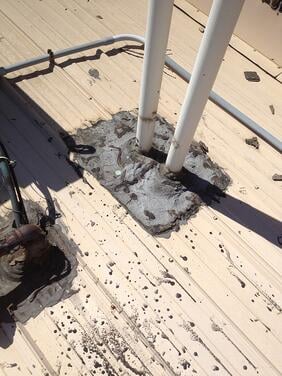 The sun also degrades the rubber flashings which last only about half the time of the metal roof. The more caulking, sealant, or tar that is placed behind and around the stack the more they seam to pond water and leak, it ’s a catch 22.

Plan on replacing worn or rotten stack flashings in order to keep your building dry.

Metal roof sealants that are installed in conjunction with a metal roof rarely last as long as the metal roofing panels do and need to be replaced with regular roof maintenance. Sealants under trims such as metal ridge caps and Z flashings, around roof transitions, counter flashings, reglets, and pitch pans will all need to be “topped off” from time to time as they wear. Use a metal roof sealant specifically made for metal roofing. Other types silicone caulkings may not adhere to the paint on the roofing panel and trims. Metal roofing goes through a daily expansion - contraction cycle and if any sealants are to last they must be able to remain flexible and stretch with metal without breaking their seal.

HVAC units on Metal Roofs are usually sitting on curbs. Installing metal roof panels is a relatively easy process but it’s the flashing that really test a metal roofers ability. HVAC offer little room for error when fabricating the flashing and keeping a curb dry can be easier said than done. The up hill side of curbs and the two upper corners of the curb flashing are difficult areas especially on lager HVAC units. Water often gets trapped behind the unit and “stands “ behind the flashing which eventually erodes sealants and begins to leak. The more you caulk, seal, or tar the uphill side the more water it will hold. This Catch 22 is difficult to remedy without removing metal roofing panels and starting over.

5. Seams and over laps