Dark/black roofing is one of the major contributors to what is called "the urban heat island". This means urban areas tend to reach temperatures of 3 - 8 degrees higher than in neighboring rural areas. The other factors are dark pavements and the lack of green vegetation in towns and cities. 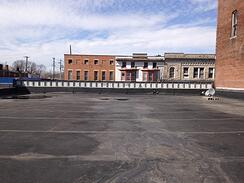 Not only is this uncomfortable it can even dangerous for those who live and work in overheated buildings, the owners of those buildings incur escalating energy bills. There is also the danger of energy shortages and premature aging of the buildings themselves. These problems can all be avoided or reduced by installing a white reflective roof membrane.

1. It is less expensive to install a white reflective roof membrane than to replace the metal panels with new ones. You could save thousands of dollars depending on the type of metal panels used on the original roof and the complexity of the installation.

2. Summer heating bills will be drastically reduced because the bright white PVC roof membrane reflects more than 80% of solar heat. Metal roof panels absorb heat, which goes down into the building. Global Cool Cities Alliance has stated that the white PVC roofs reflect as much as 300% more heat than the corrugated metal roof panels.

3. Energy usage can be reduced even further by installing the extra insulation which prevents heat from radiating out in the winter.

4. The PVC roofs are less likely to leak as the single-ply system has far fewer seams and joints than the metal roofs.

5. The installation of a PVC roof is much safer and much quieter for both customers and employees than installing a metal roof. These large, heavy metal panels have to be loaded onto the roof with large machines. 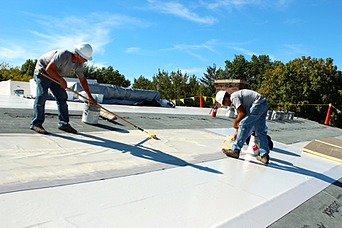 6. Engineers and architects prefer prefabricated roofs, especially when there is a particular structure or design problem. They can pre-plan the sizes, shapes and colors of the prefabricated roof panels to achieve the results they want.

7. Most roof problems occur due to errors in installation especially where the planes on the roof change. Good examples of these changes are projections, curbs, drains, perimeters and abutting walls. By using Duro Last prefabricated roofs it eliminates up to 85% of the on-site rooftop membrane seams. This will prevent the possibility of any errors or leaks occurring in the future.

To get more information on the Duro Last commercial roofing system contact us.