Snow and Ice on a Flat Roof 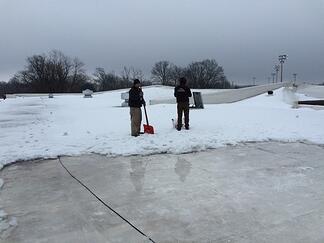 Flat roof systems are designed to quickly shed rainwater as well as melted snow and ice through their downspouts and drains. But even if they're designed to do so, ice and snow doesn't drain until it melts. If it's been a harder winter than average, as this one has been, snow and ice may not have a chance to melt and drain before it continues to accumulate on the roof, to the point that the roof could leak, lose structural integrity and collapse.

Even if the snow load isn't causing immediate problems, you may find other issues that pop up. If you're seeing leaks, it could be because an ice dam has formed over a warmer area of your roof, keeping water from draining. Trying to remove the ice dam on your own could cause serious damage to a commercial flat roof system. Though it's possible to remove the snow and ice, ice is slippery and snow can be heavy, increasing your chances of hospital bills or a worker's comp claim if you or an employee climbs onto the roof to remove the snow. It's a much better idea to leave the bulk of the snow removal to the professionals. 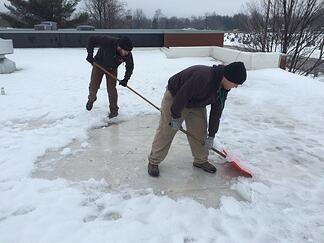 Now that you know the challenges you'll face in dealing with a heavy snow and ice load, what can you do about it? Here are some ideas to try:

If you do have to hire a contractor to remove snow and ice from your roof, you want to be sure you're hiring the right one. Here are some things to look for:

Now that you know what to do to get your roof cleared of snow and ice, it's time to put that knowledge into action. Assess the situation, fix what you can and get a good contractor to deal with the rest.