Using the RhinoBond roofing system is a quick and efficient way to install a single ply roof membrane to a building and it's also a great way to cover parapet walls.  Using Rhino Bond on your walls eliminates the need to fully adhere or glue the wall flashings on. This saves money, time, and worry about workers spilling adhesive on the new roof while glueing walls. It also lets you roof in temperatures below 40 degrees which is usually the cut off point for using adhesives.
Here's how it works...
The Rhino Bond plates are screwed to the wall using a fastening pattern outlined by the roofing membrane manufacture. For example, John Manville's TPO plate spacing and height may differ from say Duro-Last PVC plate spacing and row height. Consult the engineering department for your specific roofing membrane manufacture for the fastening pattern. 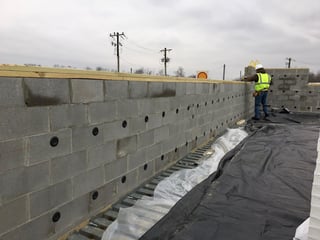 After you have established a fastening pattern, lay out your walls using a tape measure and chalk line. Remember to keep plates straight and at the same height as this will make finding the plates easier once the membrane is draped over the wall. Be sure to take into account the insulation height and also the RhinoBond tool height when setting the first row of plates closest to the roof deck since you can accidentally set your first row too low out of the reach of the Rhino tool. 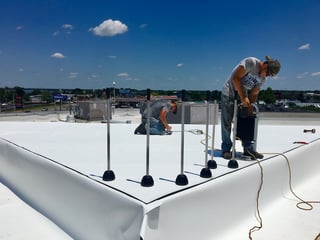 Once you have the plates installed into the walls in the correct pattern, you are ready to drape the
membrane wall flashing over the parapet. Our crews like to hang the membrane from the top down and use roofing nails to secure the membrane to the wood nailed on top of the wall. This let's gravity
pull the sheet down and wrinkles out.

With the membrane hung on the wall and nailed off to the wood blocking, you're now ready to begin the RhinoBond process which will permanently join the membrane to the plate. The same RhinoBond tool that is used for the roof deck can can be used for the walls, along with the same magnets. The tool is simply turned sideways and the magnets are strong enough to hold onto the wall sticking out. 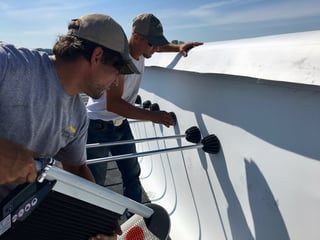 Remember to do separate test welds on your machine so you get the right settting, as the walls and deck require different settings depending on several variables.
The New Wall Tools
RhinoBond does have a special wall tool in the works. It's being demoed at the national roofing conferences and is soon to come out. This will make RhinoBonding parapet walls even faster and easier than it already is. Until then, our crews will continue to use the stand up RhinoBond on walls.
Good luck, and safe roofin'.