Commercial rubber roofing, or EPDM (Ethylene Propylene Diene Monomer), has been a top player in the roofing industry for decades because of its superior performance, lengthy lifespan and ability to withstand temperature extremes. While EPDM is certainly an excellent choice for building owners who seek a high-value, low maintenance option for their low-sloping roof, it’s possible to take the benefits of this roofing material one step further by choosing a white EPDM roof.

White rubber roofing differs from traditional black EPDM in one main way: it has a highly reflective white surface. It is sometimes referred to as a “cool roof” because of its ability to reflect sunlight and heat away from your building. This characteristic is particularly important in warmer, sunnier climates because the reflective surface of a cool roof keeps the interior of your building cooler. This can save you a great deal of money on energy costs for air conditioning, without sacrificing the durability of your roofing material. 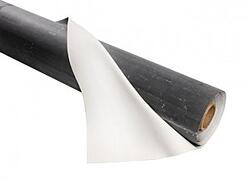 Think about it this way: if you’re planning to spend a hot, sunny day at the golf course, you’d probably choose to wear a light-colored shirt in order to stay cooler, right? A black shirt would absorb too much heat, making you feel much hotter while standing out there in the sun. Well, the same theory applies to your roof. A white roof stays cooler because it absorbs less heat.

According to the U.S. Environmental Protection Agency, studies show that a cool roof can result in an average yearly net savings of up to 50 cents per square foot on energy costs. Keep in mind that your actual cost savings with a white EPDM roof will depend on your location and circumstances.

Installing a white rubber roofing system on your building can benefit the environment in two primary ways:

As new roads and buildings are constructed, the once–rural environment is transformed into an urban landscape. Because of this newly developed infrastructure, air and surface temperatures in the region get higher because of a lack of vegetation and open land. This is known as the “urban heat island effect.” Heat islands are formed in the atmosphere surrounding the dark, impermeable surfaces of pavement, roofs and other structures. On a hot, sunny day, all of these surfaces become much warmer than the air temperature outside of this urban heat island – as much as 90 degrees warmer! 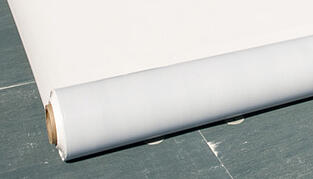 White EPDM reflects much of your roof’s solar heat and helps lower the local air temperatures, thereby decreasing the urban heat island effect in your region.

Both black and white EPDM roofing systems are logical choices for commercial, low-sloping roofs. However, in a warmer climate, a white rubber roof provides all the same advantages as a black rubber roof, with the added benefits of lower energy costs and reduced environmental impact.