Metal roofs last a long time but they don't last forever. Here are the top four reasons that even properly installed metal roofs in Indiana leak.

Over driven screws: In an attempt to endure a tight seal between the metal roofing and the screw head, many roofing companies will over drive the screw. The unneeded torque breaks the rubber washer and tends to spin it out to the side.

Under driven screws: These result when not enough torque on the screw is used to properly seal the rubber washer to the metal roofing panel. The rubber washer is never compressed and no gasket is formed.

Screws driven at the wrong angle do not allow the rubber washer to sit flat on the metal roofing. Part of the screw is sealed but part is not.

Screws that have missed the metal strut or wood framing below have nothing to seal against. These can be hard leaks to find as many times the screw is there but without touching it you wouldn't know that it didn't hit anything and didn't seal.

Even if the screws were installed correctly with the right amount of torque it doesn't mean that the rubber washer is safe. Hot Indiana summers followed by hard cold winters are unkind to the rubber washers. They degrade and loose their seal and it can be very difficult to distinguish which screw is leaking and which is not.

Metal roof sealants that are installed in conjunction with a metal roof rarely last as long as the metal roofing panels do and need to be replaced with regular roof maintenance. Sealants under trims such as metal ridge caps and Z flahsings, around roof transitions, counter flashings, reglets and pitch pans will all need to be "topped off" from time to time as they wear. Use a metal roof sealant specifically made for metal roofing. Other types of silicone caulkings may not adhere to the paint on the roofing panel and trims. 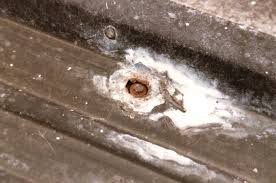 Holes can happen in metal roofing for a variety of reasons like tools being dropped, flying debris, tree branches, and even small rust holes can appear. Always keep an eye for holes when inspecting a metal roof. You won't always find holes or punctures but when you do it's generally an easy and quick fix and you can be fairly confident you found the leak you were looking for.