Hanover College continues to renovate many buildings at their campus in Hanover, IN in order to accommodate the growing student population. The more students they increase, the more classrooms they need. So Hanover College has begun to upgrade and renovate buildings. The most recent projects that Exterior Pro helped them to complete were the Lynn Hall, Stadium and Athletic Fields. They are now onto the next building, the Science Hall.

The Science Hall began when a new HVAC unit was installed and the company discovered there were two layers and the whole roof system was saturated. Originally this flat roof had a Built up Roof system that was in bad shape and began vegetation that was not intended to be there. The BUR system was holding more water than it should and even though they had not seen any major leaking inside, the roof system was in dire need of a replacement. A core cut confirmed that the roof system was holding too much water. Flat roof structures are not intended to hold so much water weight or this can lead to a roof collapse and structure problems. 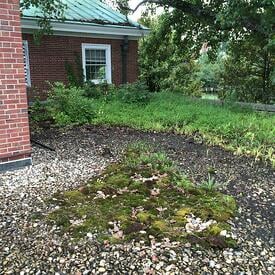 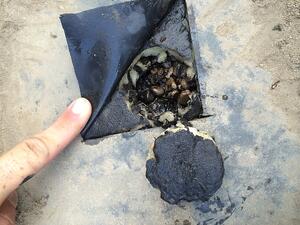 To resolve the problem for the roof Exterior Pro recommended replacing the old roof system with new installation and a water tight 50 mil Duro-Last roof system; with the condition of the roof system they currently had a layover would still leave the roof holding a lot of water. Exterior Pro was able to work with the college to help meet their budget for a new roof system.

In order to do the install, there were some steps that had to take place. The first step to replace this roof system began with removing the rock and vegetation that started to grow; removing the rock from this flat roof was done with a vacuum system. After the rock removal took place our crew was able to tear off the remaining part of the BUR system. Once this tear off step was done, the roof dried out before installing the new roof system. 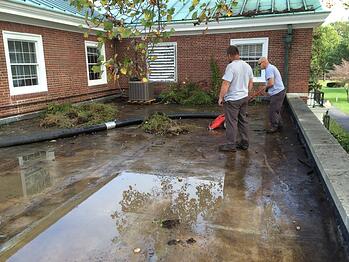 The total roof area replaced of the flat roof was 4,861 sq. ft. With removing the rock and installing the new roof system, the duration for this project is about 5-8 days.

Shortly beginning the new roof system install, Exterior Pro worked with the teachers that were still giving classes. We wanted to accommodate the teachers and students so that they could continue with their schedule while still getting their new roof system. To do this Exterior Pro worked out of the way and with less noise so the classroom had no interruptions from the roof install. After classes were over we would then begin to work again. The students and teachers were appreciative that they could continue on with their schedule.

Exterior Pro continued to work with the staff and students to meet their needs and continued working hard to complete the roof install. It was able to be completed on time with duration of 4 days. The classrooms will remain dry, the new roof can breathe again and Hanover College can continue on with their growing campus.