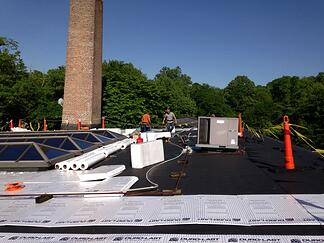 The building is a old brick building that is about 10,000 ft and has its own uniqueness with 4 big skylights and a very tall chimney. Originally the law office had a black rubber roof that was adhered and had finished its life cycle. The black rubber had started shrinking away from walls, there were some holes from where the tall brick chimney had lost some bricks and made punctures in the rubber and they had some leaking with the skylights. Besides these issues there was no major problems with the roof. These were not a result of a bad install just that the life cycle for the rubber which is about 15 years had come to an end.

Because Duro Last and rubber are compatible Exteriro Pro was able to install the new white Duro Last membrane overtop of the existing roof. The insulation was dry and did not need much replaced. 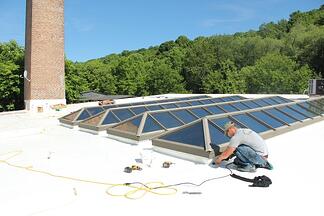 Since there were some issues with the skylights we were abel to repair the leaks and also take down the chimney to a shorter height and then finished with new metal trim around the building. Now the lawfirm has a new cool roofing system and new trim giving them a newer look for the unique roof style they have.