With the harsh winter, the rainy spring and now the pop up storms during the summer, many are experiencing issues with leaking roofs either from wind damage, hail damage, or even the gutters having damage to them. It is no surprise that many roofs will have some kind of leaking issues this year and of course they need tended to before the next winters storms. Not only are residents having issues with leaking, but the flat roofs in Southern Indiana are having leaking problems. Even though we go through dry spells that flat roofs do not show signs of leaking, once the rain comes pouring down the way it has been, especially as fast and heavy it has come down in a short time causing flooding, flat roofs are leaking as well. There can be many reason why the leaking is happening for flat roofs, and they can be a little more difficult to locate on a flat roof sometimes, so it is important to have a professional that has experience and knowledge about flat roofs to inspect it to help locate leaks and find the cause. Because even though it is leaking in one spot, does not always mean that is where the leak is originating from. 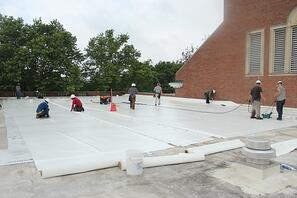 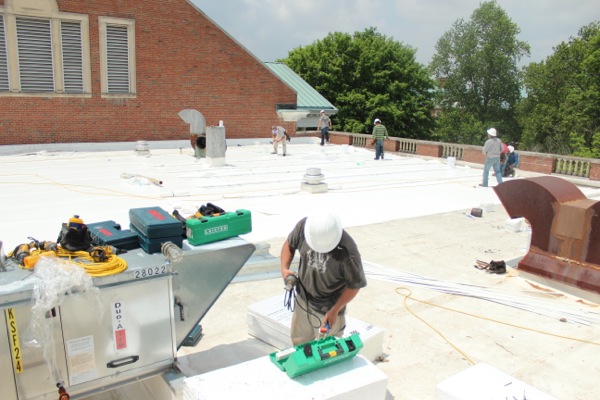 You can bet that this year has been full of leaking roofs all over, especially for Hanover College. They are already working on a project that Exterior Pro is helping with, and now they have or had a leaking problem at the Brown Campus Center. The roof was leaking and because we are already working on one of their projects, they asked us to check out the leaking roof. Once we inspected the roof we could see hail damage present in many areas of the roof. They already had Duro Last membrane installed before and now they were going to be installing new roof insulation and Duro Last membrane again. The roof is about 12,000 ft on a multi-level structure. After working with insurance adjusters for the hail damage replacing the damaged roof was on the way. The new roof installation took about 3 days to install with the help from mother nature on some dry sunny days needed for the project. Now the campus center is free of leaks and has a new Duro Last roof and ready for the next school year to start.