Are you trying to decide which route to take in your upcoming Flat roof Repair or replacement project?

4. Duro last can be glued down or held down with screws and plates

5. Duro last can only be purchased and installed by a certified roofing contractor

7. The PVC membrane is formed by inserting woven scrim or threads between a base layer of PVC and a top lay of PVC.

8. Duro Last is engineered and designed to lie over top of other types of flat roofing materials, it weighs just 1/4 pound per sq. ft.

9. The seams of Duro Last are permanently fused together using hot air

10. Installing a reflective membrane on a building can reduce summer energy cost by 15% - 25%

11. The Duro Last warranties are typically 15 year or 20 years depending on the thickness of the membrane

13. Duro Last not only manufactures the PVC membrane but also a complete line a accessories such as pipe flashings, curb flashings, drains boots, parapet wall flashings, inside and outside corners, and edge metal trims like coping caps  and 2 piece compression trims.

14. Every Duro Last commercial roofing project gets inspected, each and every one.

15. Duro Last employees the largest number of field based quality assurance reps of any flat roofing manufacture in united states including one based right here in Louisville Ky.

16. Duro Last started out as a pool liner. The original owner had a friend who was in the process of roofing his own home when rain began to move in. He called the owner and founder of Duro Last Jack Burt for help. Jack brought over a section of pool liner to cover his friends home before the storm hit and he thought “if I can keep water in, I can keep it out”. Duro Last roofing was formed shortly after. 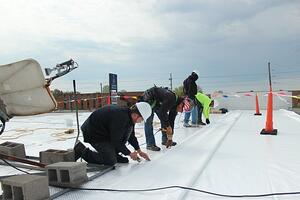 17. Duro Last can be installed in all temperature from below freezing to sweltering hot