The Dangers of Poor Roof Installation 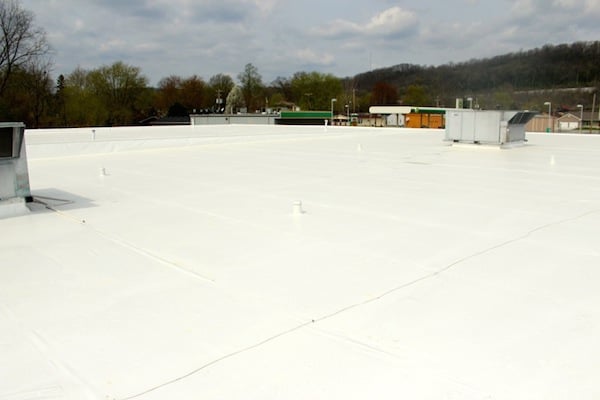 In Vevay, Ind., (25 miles south of Madison), Hemmer Companies owns a small shopping plaza that includes a Family Dollar, CVS and IGA grocery store. In late summer 2013, Hemmer paid another contractor to install a new roof over all three stores.

Within two months of installation, the building started to leak worse than before the new roof was installed. Hemmer called Exterior Pro Roofing. 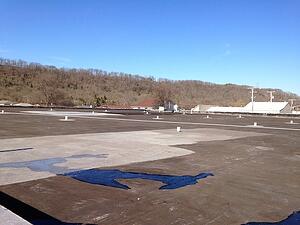 Upon inspecting the roof, we found a number of issues with how all three roofs were installed.

On the CVS and Family Dollar, the peel-and-stick modified bitumen adhesive had not adhered properly. As a result, any standing water after a rainstorm found its way into the improperly sealed seams, deteriorating the adhesive and seeping into the roof itself. Leaking was especially prevalent around the HVAC units and the masonry walls.

On the IGA roof, the contractor had used a Duro-Last® PVC membrane, but then applied a tar-based coating over it. This is the worst thing you can do to a Duro-Last roof, as the tar eats and corrodes the PVC. The building owner identified 20 different leaks, but the source of each was impossible to find because the entire roof had been coated.

At that time, most of the leaks were small, but we advised Hemmer that these roofs would not make it through the winter without some major leaks occurring. Understandably, they were reluctant to invest more into the roof after having just spent a lot of money a couple months earlier.

Unfortunately, halfway through the winter, we got a call asking for help. The building was experiencing catastrophic leaking because snow had build up on the roof, and a layer of ice had formed over the top. The heat from the building was melting the lower layer of snow, while the weight of the ice was pushing the water into the building.

The Family Dollar had 60 leaks, CVS had 12 to 15 leaks and IGA 25 to 30 leaks. Storeowners were laying tarps over merchandise, and Hemmer was getting a lot of calls from upset storeowners and franchises demanding a fix. 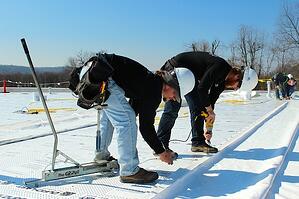 Because it was the winter, we were strapped in terms of what we could do on account of the cold weather. At the same time, we were sympathetic to the building owner’s situation, with unhappy tenants and a lot of money tied up in a poorly installed roof.

Our solution was to install a ½-layer of insulation over the modified bitumen on the CVS and Family Dollar, and then install a new Duro-Last membrane over it. On top of the IGA store, we recommended installing a slipsheet to cover the existing tar coating, and then apply a new Duro-Last® membrane.

To stop the masonry wall leaks, we took the new Duro-Last® up and over the walls, and secured it with trim along three sides. On the backside of the building, we terminated with Duro-Last into the gutter.

This approach saved Hemmer money because we did not have to perform any sort of roof tear off.

Overall the job went quickly and smoothly without any interruption to business at the three stores.