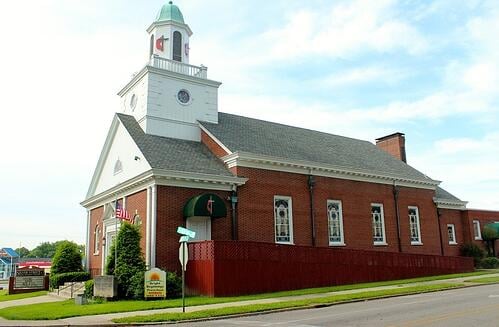 Built in the 1950s, the building is constructed of block and brick walls, and topped with a concrete deck. The original roof was hot tar built up and covered with gravel. It then had a spray foam roof installed over top that ranged in thickness from 1 to 8 inches. The spray foam went up the parapet walls, but did not completely seal the masonry and limestone cap—leaving it exposed and leaking. 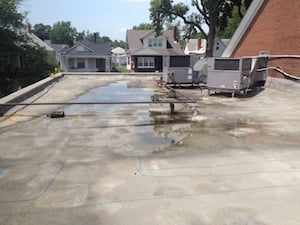 A Plan to Overcome Unique Challenges

The various complications with this roofing project meant Exterior Pro Roofing had to develop a comprehensive plan that would quickly and efficiently remedy leaks occurring every time it rained.

The first order of business was to remove the old spray foam roofing. Completely saturated, it was unfit to be covered with a Duro-Last® single-ply membrane. Once removed, new insulation was applied.

The Duro-Last® was then installed directly on top of the existing built-up roof. Duro-Last was recommended because it was impossible to eliminate 100% of the ponding water caused by the sagging concrete roof structure without replacing the entire roof—a costly project. Duro-Last® provided a watertight seal over the roof and its warranty was not affected or voided by the presence of standing water.

To completely encapsulate the masonry wall, the membrane was laid up and over the exposed walls, sealing them from water exposure.

Flat-Roof Repairs On Time and On Budget

To date, this remains one of the most challenging projects Exterior Pro Roofing has completed. Despite unique obstacles, the company finished the job on time and on budget, with a few new friends made along the way.